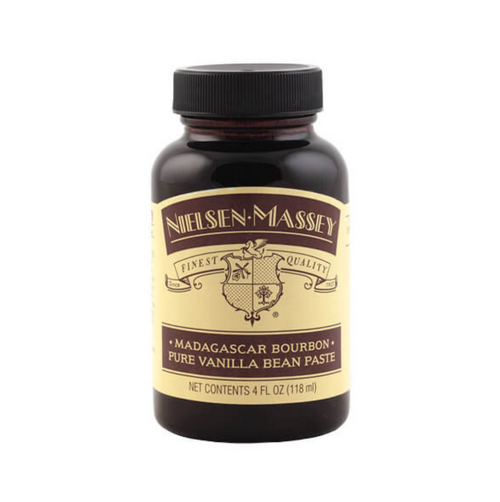 Madagascar Bourbon Pure Vanilla Bean Paste is crafted from our famous Madagascar Bourbon Pure Vanilla Extract, along with real bean specks from the vanilla pod. The flavor profile is sweet, creamy and mellow with velvety after-tones. The paste’s thick consistency (similar to molasses) enables you to add more delicious vanilla flavor without thinning out your batters or sauces. It’s also ideal for recipes in which you want to add the enticing visual flair of vanilla bean specks, such as crème brûlée and ice cream.

Located just east of the southern portion of Africa, the area known as the Bourbon Islands includes the islands of Réunion, Madagascar, Mauritius, Comoro and Seychelles. Hence, when we refer to Madagascar Bourbon, we’re referring to the region and not to the liquor.

Around 1793, a vanilla vine was smuggled from Mexico to the Bourbon Island of Réunion. For almost 50 years after its arrival at Réunion, the growth and production of vanilla was difficult. The vines grew successfully with beautiful blossoms but seldom resulted in vanilla pods. Without the Melipona bee, vanilla’s indigenous pollinator in Mexico, the flowers were only occasionally pollinated by local insects.

It wasn’t until 1836 that Charles Morren, a Belgian botanist, discovered the link between the bee and the plant’s pollination. In 1841, Edmond Albius of Réunion developed an efficient method for fertilizing vanilla flowers by hand.

Eventually, hand pollination was perfected on a commercial scale. Growers could choose the best flowers and properly space them out on the vine, resulting in a healthier and higher quality vanilla pod. Combined with the hot, humid climate and rich soil, hand pollination by the country’s skilled and patient farmers has enabled Madagascar to become the world’s top vanilla producer in both quantity and quality.

In Madagascar, the curing process is similar to that of Mexico with one slight difference; the farmers initiate the curing process by immersing the green vanilla beans in hot water for a short time. The farmers then store the beans in sweat boxes before beginning the routine of spreading beans in the sun and packing them away at night. This unique curing process, along with the rich soil and growing conditions, helps create the unique, rich, and highly complex flavor profile Madagascar vanilla is known for.